What's on the way - Ford

Previously, we took a look at what GM has coming in the next year and how, hopefully, it will buy GM enough time with great product for them to get their problems solved with healthcare and a shaky supply chain (can you say Delphi?).

Unfortunately, GM isn't the only company with these sorts of problems. Ford is on equally awful footing with problems with their Visteon supplier spin-off as well as their own legacy costs with healthcare coverage for their workers and pension liabilities.

The best way out of this problem is with great product. What does Ford have coming that might help them out of their mess?

Like GM, Ford is focusing mainly on their SUV business - logically so given the high margins that they make on that part of the market. Recently, the new F-150 and later the Lincoln Mark LT (basically a dressed-up F-150 Supercrew) were unveiled. In 2006, this new platform will filter into the full-sized SUV market with an all-new Expedition as well as a Suburban competitor and Excursion replacement possibly called the Ford Everest. Also, Lincoln will get an all-new Navigator on this chassis as well.

Additionally, Ford will replace the F-250/350 vehicles with versions based on the brand new chassis that debuted under the F-150 in 2004. Styling is expected to be even more in-your-face, in the vein of the Ford Tonka show truck from a few years back. Also, in keeping with Ford's interior plans, expect much higher levels of fit, finish, and quality.

Expect all these full-sized trucks and SUV's to go on sale late in 2006. 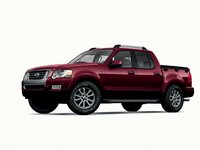 After a one year hiatus, Ford will be re-introducing the Explorer Sport Trac in the spring. Based on the recently revised Explorer the Sport Trac will also, for the first time, be available with the same 4.6l V-8 also available in the Explorer. Styling, as before, is inspired from its Explorer big-brother - even down to the faux VW Jetta chrome grill that extends down into the bumper.

Just like GM, Ford is also planning a salvo of mid-sized, crossover SUV's. These will share a chassis with Ford's current favorite platform - that of the Mazda 6. Ford will get a version tentatively called 'Edge', with styling similar to that of the new Ford Fusion, and Lincoln will get a version that they plan to call Aviator... Yes, I know. Lincoln already sells a version of the Ford Explorer/ Mercury Mountaineer that they call Aviator. However, sales have not been as robust as Ford had hoped. They will be discontinuing the current Aviator and replacing it with this car-based, more luxurious and car-like SUV. Lincoln hopes to compete better with the Cadillac SRX and Lexus RX series with this crossover.

Before you think that Ford is even more truck-centric than GM during their 2006 roll-outs...there is a little flash to be expected as well.

In the summer of 2006, expect SVT, Ford's performance arm, to release the supercharged version of the Ford Mustang - the Shelby GT500. Styling is quite similar to the Mustang GT concept car that previewed the Mustang, showing that Ford got the message with the highly positive reaction to the concept car. The GT500 was announced early in 2005 as a concept car (pictured) called the Ford Shelby Cobra GT500 - an obvious mouth-full and Ford has seen fit to drop the 'Cobra' part of the name, but will keep the Cobra, snake-head badges inside and out if not the Cobra name.

With a supercharged 5.4l V-8 similar in design to that in the Ford GT supercar, the GT500 is expected to pack over 450hp and challenge Corvettes and Vipers in performance - unfortunately for Corvette money (over $40k, at least). Expect this to feed the major car magazine comparison test industry for several months during the middle of the year.

One brand hasn't been mentioned up to this point. Mercury. Unfortunately, after a fairly steady stream of product (though mostly mildly restyled Fords) Mercury will be receiving no new product in 2006 - or at least that is how it looks right now. Maybe we'll get a surprise.

This doesn't look like as exciting a year for Ford as 2006 will be for GM, but that is tempered by the fact that Ford did release quite a few new products in 2005. Hopefully this will be enough to keep their momentum.