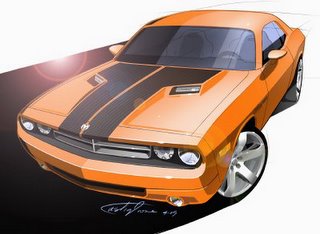 Autoweek.com has a great pair of spy photos of the Dodge Challenger concept car during what appears to be a photo shoot. Take a look here.

Dodge has also put out a sketch of the car in preparation for its autoshow debut either at LA or Detroit.

This is the first peak at Dodge's answer to the new Mustang. The car is expected to be based on the next generation of rear-wheel drive cars from Chrysler (the LY chassis) that will also serve as the basis for the next Chrysler 300 and Dodge Charger and Magnum. Unfortunately, this also means that this car won't appear in showrooms until 2008 at the earliest as a 2009 model.