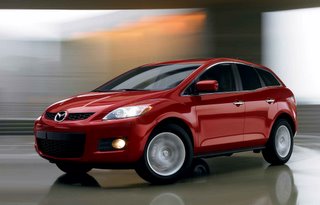 Mazda has decided to preview the production version of their CX-7 crossover as well as their Kabura concept sports car.

The CX-7 is the production version of the MX-CrosSport concept that Mazda displayed at the Detroit auto show (North American International Auto Show - NAIAS for those playing at home). It is a sister vehicle to the upcoming Mazda 6 based Ford Edge and Lincoln Aviator. 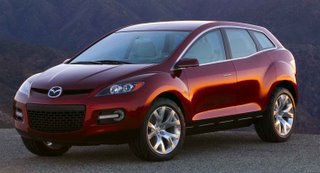 It was obvious at the time that the concept was a preview of the production car, though it is somewhat surprising how closely they have honored the show car's shape. Really, with the Nissan Murano and Infiniti FX series, it shouldn't be surprising for them to build a high-style crossover. Though, it would have been easy for them to take the dull route that most other companies follow. 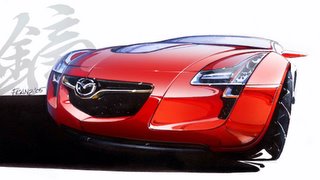 The Kabura appears to be a preview of an upcoming Mazda sports car. From previous experience, they could either be previewing the second-gen RX-8 or even the rumored 2-seat sports car that is expected to fit between the RX-8 and the MX-5 (Miata). We'll have to wait until we see the actual concept to get a better feel for this.
Posted by Scott K at 6:47 PM