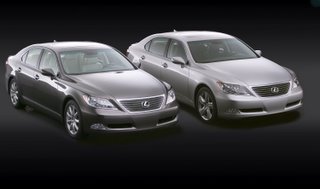 Yes, I said 8 speeds. Where will it all end?

Other highlights include a 19 speaker stereo with a built-in hard drive (capable of holding 4000 songs) as well as a version of Toyota's parallel parking assist feature where the car will almost park itself (controlling the steering for you).

The L version is a long-wheelbase variant (a short wheelbase LS is shown with the L in the picture above).

Also, there was an announcement that the hybrid LS will debut at the NY auto show in April.
Posted by Scott K at 1:58 PM