Jeep has decided to debut its least capable Jeep ever along with its most capable ever.

The Jeep Compass is Jeeps first version of the shared platform that underpins the new Dodge Caliber as well as next Mitsubishi Lancer and Outlander. It is a front-drive vehicle with an automatic all-wheel drive system with a 'lock' mode for force power to the rear wheels.

It is intended for urban Jeep fans who love the Jeep mystique but don't need/want the rough-and-tumble ride and handling of a traditional Jeep (I wanted to say 'real Jeep' but thought I'd be nice).

Unlike the expected Jeep Patriot, which is thought to be a more off-road capable Jeep, this is an interesting attempt to see how far the Jeep brand can be pushed without damaging the image that makes these potential buyers like Jeep in the first place...we'll see.

In order to keep the off-road capability average up for the press conference, Jeep also showed off the all-new 2007 Jeep Wrangler. Almost 6 inches wider, much roomier, with lots of safety technology (side airbags, ABS, stability control)...the Wrangler looks to be again an off-road marvel. Highlights include a new 205hp 3.8l V-6 in place of the previous (and long in the tooth) 4.0l inline 6. Also, Jeep finally has ready the modular roof panel system that they've been teasing us with for years. In this application, you can remove a small panel over either the driver or passenger as well as a large panel over the rear seats. With all in place, you have a nice hard-top. With all out, a reasonable impression of the convertible version (which will get a whiz-bang top with a 'sunroof' feature that allows owners to open a section above the front seats. 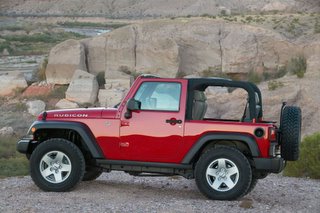 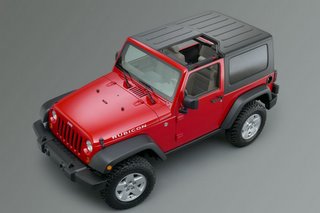 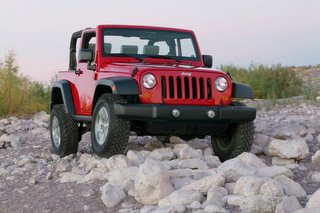