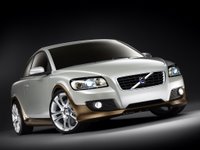 Volvo is making one thing very clear...this is a production car that will go on sale worldwide starting at the end of 2006 - even to the point of pre-announcing that the production version will bow at the Paris autoshow in September 06.

Based on the same C1 chassis that underpins the S40 sedan, the C30 is 9 inches shorter, has a rear hatch vs. the more standard trunk on the S40 (resulting in a coupe/wagon hybrid look), and is aimed squarely at active lifestyle types that wouldn't be caught dead in a sedan. 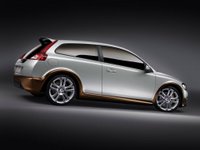 The concept, powered by a 260hp turbo inline 5-cylinder (significantly more powerful than the 218hp that this engine produces in the S40), packs seating for 4, a swoopy interior with the now Volvo-trademark thin, freestanding center console.

The lower number in the name does suggest that the C30 will be priced below the S40, so expect a turbo version similar to the S40 T5 to be priced somewhat lower. Volvo may make turbo power standard in order to prevent having to go into the low 20k pricerange for base C30's, but a fully optioned out model should top out significantly under 30k.

This should be a nice addition to the Volvo stable.
Posted by Scott K at 6:20 PM