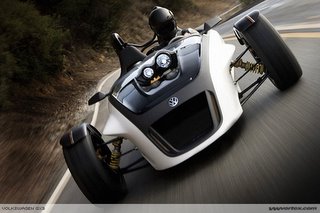 I have always been a big fan of odd sporting machines. When I was in high school, I bought plans for a build-it-at-home 3-wheeled motorcycle. It was from a now defunct company called Dolphin Vehicles and was called the Vortex. It was built using marine grade plywood and took an old Triumph Spitfire front suspension. The body was built up using foam covered in fiberglass mat.

I never go around to building it, but I spent many an hour figuring out exactly how I was going to go about it.

Now, VW has shown a concept that has shown how cool a similar car/trike/motorcycle can be when built to OEM specs.

With a 1.6l engine powering the rear wheel, seating for 2, 0-62mph in about 5 and a half seconds all with 46mpg and an estimated sale price of $17k...this would make a great fair-weather commuter car.

Too bad, they'll never build it.