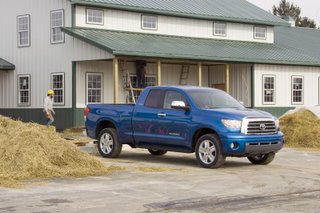 Detroit...we have a problem. Where Nissan dared tread, but did so with a funky looking full-size that didn't appeal to the die-hard full-sized truck buyer...Toyota has aimed at exactly what these buyers want and delivered.

Amazing what being profitable does for your ability to bring out a product as broad of scope as a full-sized pickup in the domestic makers' vein. The new Tundra will be available with 3 engines (4.0l V-6, 4.7l V-8, and a new 5.7l V-8 of unspecified hp and torque - but expected to be the most powerful V-8 in any full-sized pickup). Towing capacity is stated to be up to 10000 lbs.

Inside is a stylish, functional, and otherwise typical Toyota car-like interior with a heavy layer of butch added to make it appeal to the buyers of competing full-sizers.

In case you were wondering how this new, bigger Tundra stacks up against its competition...here's how it looks to us (stats are currently only available for the Tundra 4x4 crew-cab - so that's what we used to put together this chart). We ignored the Dodge Ram Mega-Cab since that beast is a class of its own (we used the 4x4 quad-cab instead).

Unfortunately, it remains to be seen exactly how the interior room, hp, fuel economy, and other stats (like price) stack up against the competition.
Posted by Scott K at 12:35 PM No comments:

At this year's Chicago Auto Show, Lincoln had a couple announcements.

First up, is further proof that Lincoln is committed to an alpha-naming system for their cars. So much so, that the just released Lincoln Zephyr is the Zephyr no more. Now, we have the Lincoln MKZ. Stylistic changes appear to be slight, if any, to go along with the new name.

Announced, however, was the future availability of all-wheel drive and Ford's 3.5l V-6 that packs 250hp (and more torque than the 3.0l that is standard in the Zephyr...er...MKZ).

Now, with all this alpha-naming goodness, you'd be sure that the new Navigator would be something like the MKN or some such. Well, Lincoln's having none of that. Showing that they have no nerve to go their own way, they are keeping the Navigator name - as if to say 'Cadillac kept Escalade, can we keep Navigator, huh? huh?'

Navigator packs mostly the enhancements we've come to know and love from the Expedition (in standard and EL) trim. In a move that further shows Lincoln's lack of trend-setting-ness, we have the new Navigator ESV (er...L). It's heartwarming to see Ford getting hay from canceling the Excursion just to replace it with not 1 but 2 extra-big SUV's ain't it?

Interior styling on the Nav carries forward Lincoln's retro-70's styling theme with square gauges and switches that seem somehow reminiscent of buttons I haven't seen since the early 80's.

And, as if to answer my MKX post where I hammered Lincoln for using the new cheesegrater style grill there and there alone (even beside a MKS concept sedan that had a grill like that on the Zephyr)...we now have the mother of all cheesegrater grills on the new Navigator. Whether Ford will have the nerve to carry this grill to the MKZ and the upcoming MKS flagship remains to be seen.
Posted by Scott K at 10:37 AM No comments: 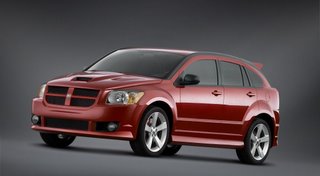 The price is probably a close held secret since it looks like this is not going to be the inexpensive pocket-rocket the Neon based SRT-4 was. 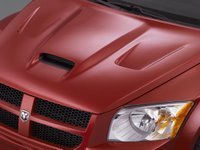 Ford chose truck country to unveil the replacements for the Expedition and Excursion at the highly renowned Houston (!?) Auto Show.

What? You heard that Ford had seen the light, and in all their hybrid-loving enlightenment decided to discontinue the Excursion? Well, that's partially true. The Excursion name is no more. Allow me to introduce you to the new Excursion, er...Expedition EL. The EL is to the Expedition just like the Suburban is to the Tahoe over in bowtie country.

This time around, the Expedition twins have butch sheetmetal that resembles a variant of the Superduty pickup much more than a scaled-up Explorer.

You'll also notice the same 'bags-under-the-eyes' headlight treatment that Ford just unveiled in Detroit on the Ford Edge cross-over. It's distinctive, but certainly not what I'd call attractive.

In place of the tri-bar grill that the Fusion and Edge carry, you'll notice a version of the motif on the Expedition where the bars are aped by the air inlets in this grill. I have to give Ford additional credit for sticking to this theme better than ones past. Let's hope they can at least get the whole line-up refreshed before someone in Dearborn decides to go another route (a la 'New Edge').

Interior styling appears to be cribbed straight from the new-ish F-150. Not a bad thing at all considering the F-150 has, arguably, the best truck interior in the business.

This may not be enough to knock GM off its full-sized SUV pedestal, but it certainly keeps Ford in the hunt.
Posted by Scott K at 12:10 PM No comments: 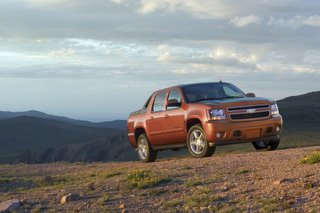 Pics are starting to be released in advance of the Chicago auto show next week.

Here we have the first official picture of the Chevrolet Avalanche. In standard GM fashion, looking quite a bit like a Tahoe with a bed in place of its covered cargo hold.

This does not bode well for any styling surprises when Chevrolet unveils the Silverado.
Posted by Scott K at 8:36 AM No comments: