They've been busy over at the Saturn division...

Today, Saturn announced that they would be showing a concept car (showing Saturns future styling direction) as well as 3, count 'em, 3 production vehicles:

2007 Saturn Aura sedan - based on Epsilon and previewed with the Aura concept at Detroit in 2005, this car is a darn sight better than the L-series Saturn tried, and failed, to use to break into the mid-sized sedan market.

2007 Saturn Outlook crossover - bigger than a VUE...in fact, interior room is similar to that of the Tahoe/Yukon body-on-frame SUV's from GM. Initially expected to be available with 3.6l 250+hp high-feature V-6 power - this should help drive cross-over buyers to Saturn showrooms.

...and, my personal favorite and one I've been predicting for what feels like forever... 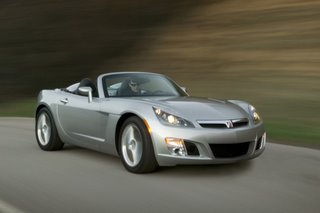 2007 Saturn Sky Redline - basically the same as the Opel GT shown earlier this month in Geneva. The Sky RL will go on sale 'in the fall' - which I suppose gives GM until almost Christmas to get it to dealers.

Time to start saving my pennies.
Posted by Scott K at 3:36 PM