Kappa-watch - Daewoo version of the Sky?

Funny, it seemed that the Solstice was the reason for the Kappa chassis. But, more and more often, it appears that the Sky is the darling of the platform.

Earlier this year, we saw that the 2.0l turbo Sky Red Line was going to be sold as the Opel GT (in fact, the RL had not yet even been officially announced).

Now Daewoo is getting into the act.

While Opel gets only the turbo, Daewoo will only get the normally aspirated 2.4l from the base Sky for their G2X.

What we have here is proof positive what GM has been talking about when referring to the way they plan to leverage their global might without diluting their brands. Daewoo is not sold here anymore (except as entry level Chevy's and Suzuki's). Opel doesn't play here either. Saturn only sells cars in North America.

So, you take one halo car and generate 3. Notice the difference between this and when GM used to slap a different grill on the same car and sell it across the street from one another (if not in the same exact showroom). These cars will never, ever see each other on the street. A German driving an Opel GT will never be reminded at a stoplight that he could have bought the same car at Saturn or, heaven forbid, the Daewoo dealer.

All three brands get a halo car to pull folks into showrooms without the potential negative feelings of the car not being truly special.

This might just work after all.
Posted by Scott K at 3:26 PM No comments:

GM = increasing Kappa production as much and as fast as it can in order to help take the edge off the situation. Will Solstices (Solsti?) and Skies soon be commonplace and stacking up on dealer lots? Not likely given the limitations of hydroformed body panels (a low volume technique pioneered by GM for these cars).

Any increase in supply will likely be more than accounted for by the feverish demand. I, for one, am hoping that GM doesn't screw up a good thing by building too many of these lovely cars and having to discount them (if only because of the ill will that would result with the customers who felt they had to pay full sticker price - or more - for their Kappa).
Posted by Scott K at 3:16 PM No comments: 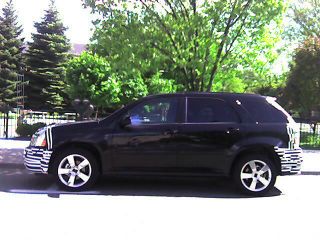 The HB blog has some nice photos of a lightly disguised Equinox. Differences? New front fascia with what appear to be brake cooling ducts, big 5-spoke wheels that reveal the only Equinox with rear discs, dual exhausts.

Imagine this with the same high-feature 3.6l V-6 with variable valve timing (260hp-ish) and you can see a nice sporty version of the Equinox.

Worthy of SS badging? Maybe not. But expect it one way or the other soon.

Porsche to debut Cayman (minus the S)

Given Porsche's trend lately to use an S to denote a slightly higher performance variant of an existing model, and that the new Cayman debuted as the Cayman S...folks have been wondering if/when a non-S model would show up.

The answer from Porsche? July.

The good folks over at thecarconnection.com have had a chance to take a spin in the Camaro concept car.

Interestingly, they state that the concept is built on a prototype of the new Zeta chassis that will underpin the actual production car (that has not been officially announced, though is almost certainly will be eventually). Also, the headroom of the concept is barely adequate for the 6-foot author - so expect a higher roof on the production Camaro.

Read all about it here: 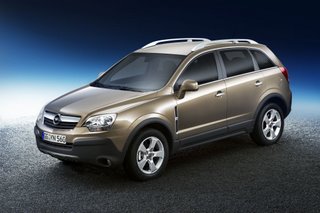 First we had the 3-door Antera GTC concept, then the identical Saturn PreVue concept...now we have the first pictures of the production version of the 5-door Opel Antera and soon to be new Saturn Vue (though Saturn may change the name to hammer home how different this is than the Chevy Equinox/Pontiac Torrent/Suzuki's new XL-7 sibling that is the current VUE).

In Opel guise, the Antera gets a 2.4l gasoline 4-cylinder as it's base powerplant (very likely the base engine for Saturn duty as well). A 3.2l V-6 with 240-ish hp would be the replacement for the Honda sourced engine used in the VUE (and would give the Outlook's 3.6l engine bragging rights). Opel will offer a 150hp, 2.0l diesel as well, but don't expect it to make the jump to Saturn unless diesel's become much more popular than they currently are.

Expect a higher level of fit-and-finish than the current Vue as well as modern high-tech gadgets like stability control (StabiliTrak) and in-dash navigation available on top models. 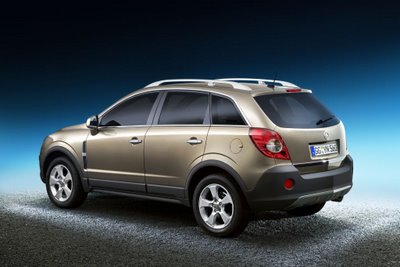 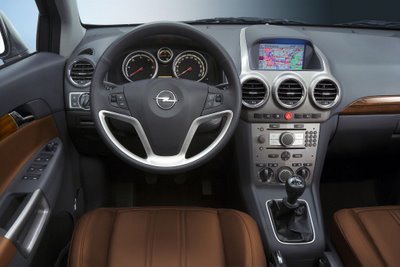 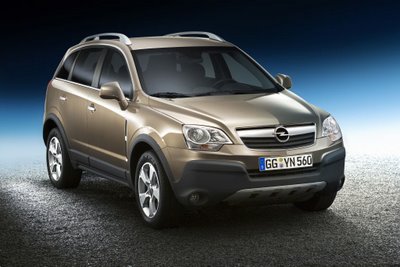 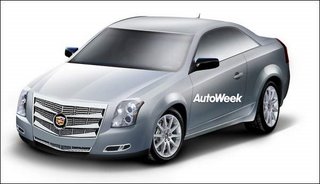 I knew something was up with the styling bucks Bob Lutz showed on 60 Minutes a few weeks back.

The one they showed the back of was way too sporty for a CTS sedan with a very rakish rear window. Over at the Caddy Edge, I predicted that this was actually a CTS coupe...and much joy ensued.

Now, the rumors are more official since Autoweek (the above sketch is from them) and Automotive News are both reporting it.

CTS Coupe Rumored
Posted by Scott K at 9:48 AM No comments:

Autoblog.com is reporting on a pretty depressing development. GM has sworn that they would get away from badge engineering product (in the modern context - making minor changes and selling the same vehicle under different names)...and we've heard more than once that Pontiac would get decidedly sporty models and more recently that they would not be a full-line manufacturer.

Well, apparently GM isn't strong enough to toe that line...the dealers whined about the loss of the Sunfire coupe and instead of simply telling them that they are now a niche brand that will sell sporty cars...GM caved and is giving them a 'G5' that is little more than a Cobalt coupe with a Pontiac grill.

Maybe they'll show some guts next time when the dealers ask for watered-down product and actually say 'no'.

Autoblog.com - Pontiac G5 Debuts at Fundraiser
Posted by Scott K at 10:39 AM No comments:

Saturn to Import Opel Astra to replace ION - and soon

The good folks over at All Cars, All the Time are reporting on an Automotive News piece about Saturn. Aparently, rather than waiting for the next generation Delta chassis (Chevy Cobalt, Saturn ION) to replace the current, lack-luster ION, they will do something fairly drastic.

They will take the current Opel Astra (also built on the Delta chassis) sometime next year, and import it to the US with Saturn badging and likely a different name.

Why they can't just build the Astra in the current Cobalt/ION plant is not known.

This will have the unfortunate side-effect of raising the Saturn small-car's price into the 16k range. Quite a jump for folks used to the ION's current $12490 starting price.

I'm with the guys at ACAtT in crossing my fingers that the Astra with the panoramic windshield (that wraps well into the roof over the driver and front passenger - and would be a great sight-seeing car) will make the trip over as well.

Saturn to import Astra
Posted by Scott K at 10:24 AM No comments:

Woo hoo - Alfa Romeo return to the US is official 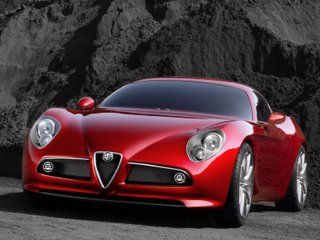 As reported over at ItaliaSpeed, Alfa could be back on sale in the US as early as the end of 2007.

Alfa has been putting out some stunning product of late, and would make a great entry-level addition to the exotic-only Italian line-ups Americans have become used to (Lamborghini, Ferrari, Maserati).

Read all about it here: