Dodge expected to announce Challenger has been approved 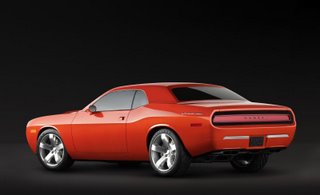 The Detroit News is reporting that DaimlerChrysler will officially announce that the Dodge Challenger is approved for production at this Saturday's Pepsi 400.

One expected surprise is that the Challenger might see showrooms in late 2007 or early 2008 - 2-3 years earlier than the most conservative estimates. Unknown is if the Challenger will be built on the current LX chassis that underpins the Dodge Magnum/Charger as well as the Chrysler 300 or if it will be the first product built on the upcoming LY replacement for these cars.

It is likely that the Challenger will be both more expensive than the Mustang, V-8 only, the only version of the LX/LY available with a true manual transmission, and significantly larger than the Mustang - due to the fact that the LX/LY were built to be a large-sedan chassis.

Detroit News - Muscle car is reborn
Posted by Scott K at 10:37 AM