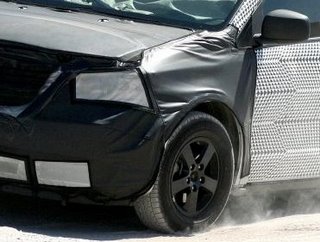 World Car Fans has a series of photos of a disguised Chrysler minivan undergoing testing.

Ignoring the obvious photo-chop of a 300c Touring (Euro-only 300 wagon) that they pawn off as a peek at what the new mini will look like - this shows yet again a big, block-y version of the minivan theme.

Given hints given with recent show cars, expect a possible V-8 at the top engine as well as more innovations like those previewed on the Dodge Rampage concept truck (box the styling out of that concept and you could be seeing the next Caravan.

Expect an unveiling at the 2007 North American International Auto Show in Detroit this January.