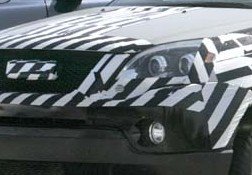 The third of GM's 3 new lambda crossovers, the GMC Acadia, has made an appearance over at The Car Connection

Lambda, as you may recall, is the new large crossover platform that will underpin the Buick Enclave, the Saturn Outlook, and this GMC Acadia.

The lambdas are very close in size to the GMT900's (Chevy Tahoe, GMC Yukon, Cadillac Escalade) but are equipped, at least initially only with GM's 'high-feature' 3.6l VVT V-6. A small V-8 is expected later down the line in at least the GMC and Buick.

In the pictures at The Car Connection (see the link below) you can see that the GMC will carry some of the same clean, understated lines of the Saturn with significant differences to front styling (and, reports are, interior).

Read all about it at: