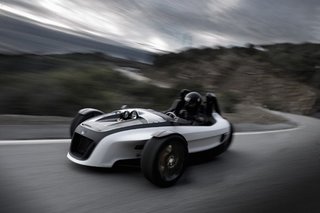 The German Car Blog is reporting that VW has officially killed the GX3 3-wheeled car/motorcycle that was expected to go into production within the next year.

Based on a concept shown at the last Los Angeles Auto Show with two front wheels and a single rear wheel, making it technically a motorcycle - the GX3 would have had sports car acceleration (5.7 seconds 0-60), incredible cornering (close to 1.25 lateral g's), mid-40's fuel economy, and no roof.

It appears that concerns about liability have made VW abandon the project.