At the State Fair in Dallas on Sept 28th, Ford will show off the brand new Super Duty for all the big-truck lovers out there to drool over.

Surprise, surprise...Camaro is a GO! 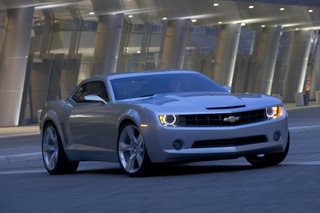 Rick Wagoner announced today that the Camaro will go into production.

Based on an Australian designed platform with independent rear suspension (Zeta by any other name?) and will begin production in the fall of 2008 for sale in the first quarter of 2009.

The displayed car is the same concept shown earlier, but GM promises that the changes for production will be minor.

This will put Camaro significantly behind the new Challenger which is supposed to be available in about 18 months. Of course, the Challenger is expected to be a higher-priced, V-8 only model while Camaro will be available in a variety of powertrains (including a base V-6) and will also likely have a convertible model soon after launch.

Now, we just have to wait about 24 months for the 3-way ponycar comparison tests to hit the magazines.

Read here to see Bob Lutz take on the announcement:

Fastlane Blog - Give the People what they Want
Posted by Scott K at 8:23 AM No comments: