You may have heard by now, but Cadillac has officially announced its first-ever station wagon... 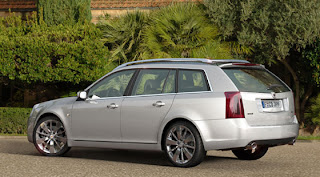 Of course, you won't be able to get it in the US as it is a variant of the BLS sedan, itself based on GM's Epsilon chassis shared with the Saab 9-3 (in fact, the BLS is built alongside the 9-3) as well as the Chevy Malibu, Pontiac G6, Saturn Aura, and Opel Vectra.

BLS sales have been pretty slow since its debut, so this addition should help to boost sales a bit.

Read more about it at:

the CaddyEdge.com
Posted by Scott K at 12:42 PM