Update: April 4, 2007 - Chevy has unveiled all three microcars and opened voting at vote4chevrolet.com. Check out the new post with pictures!

Today, Chevy announced that they will have a trio of microcar concepts to show off at the New York Auto Show. 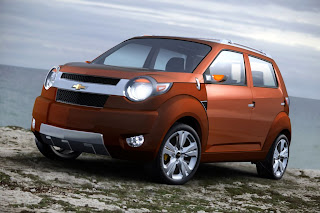 They have teased us with a rendering of the Trax concept, designed, along with the other two (the Groove and Beat) at GM's design center in Incheon, South Korea. The Trax packs a 1.0 litre gas engine and is aimed (as most micros are) at urban drivers.

GM will be allowing show goers to vote on their favorite at vote4chevrolet.com starting on April 4th.

It looks like GM may be taking the threat of the DaimlerChrysler Smart ForTwo seriously and is preparing their own competing product - and using the web site to gauge which concept is closest to the mark.
Posted by Scott K at 12:13 PM