Ford to debut production version of the Fairlane at NY show

It appears that Ford is ready to unveil the production people-mover, based in part on its Fairlane concept from 2005 (concept shown here). 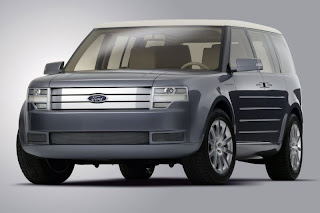 Now, we had been warned that Fairlane would likely not be the name, and the latest reports bear that out. Expect this 3-row, 7-seater, non-minivan to carry the 'Flex' name when it debuts the first week of April at the New York Auto Show.

Interestingly, the Flex is expected to have what Ford is calling 'French Doors' rather than rear sliders (too minivan-y, I suppose) or even conventional opening rear doors. I'm sure a lot will be made of this design and name (since 'suicide doors' is something the marketers shy away from).

The only question I'll have is how they will significantly differentiate this from the Taurus X (old Freestyle) that is also a 3-row, 7-seat people mover at about the same price point.

Lincoln will also get a version of the Flex, but that won't debut until later in the year.

The Car Connection: Ford Flex Replacing Minivan in NY
Posted by Scott K at 8:21 AM