Opel, GM's Euro-brand that serves as a partner for our Saturn, has just shown off the top model of their entry-level car, the Corsa OPC. 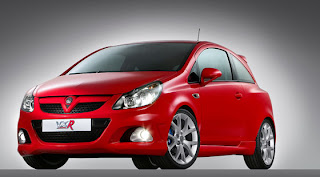 This fall we will get the 3 and 5-door versions of the Astra hatchback, the Corsa's big brother. GM has also made it clear that, when the Corsa is redesigned in a few years, that a Saturn version would be on the way.

This would make a great competitor against such B-class cars as the Honda Fit and Toyota Yaris which top out under 110hp (though they do get better mileage - but a base Corsa could compete handily with that).

Check out the pictures of the Vauxhall (UK brand that sells Opel cars) Corsa VXR at: