Back in the day, Carol Shelby was responsible for some pretty hot Mustangs. Now, he's lending his name again to even more hot Mustangs such as the Shelby GT-H (a special GT for Hertz), Shelby GT, and the GT500 coupe and convertible. 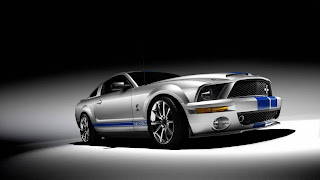 If you thought the Shelby GT500 with its 500hp was an impressive ride - check this out.

The GT500KR (KR = King of the Road and hearkens back to the classic GT500KR of 40 years ago) is a limited production (only 1000 will be built), coupe only, with an even higher performance version of the 5.4l supercharged V-8 from the standard GT500. In this iteration, we get 540hp and 510lb*ft of torque.

Other special touches include:

Recalibrated suspension, underhood cross brace, carbon composite hood with scoops paterned after the original GT500KR, 20" Shelby designed wheels for the concept (18" of the same design for the production KR), front brake cooling ducts, and 40th anniversary badging all over.

Expect MSRP's over 50k with actual transaction prices quite a bit higher.
Posted by Scott K at 10:34 AM