I guess that explains the naming...new baby crossover CX-5 coming from Mazda

I wondered when Mazda brought out the CX-7 based loosely on Mazda3 components, why they went with such a high number. 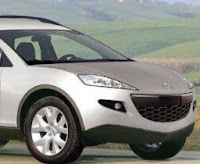 Then, they brought out a Mazda6 based CX-9 (cousin to the Ford Edge) and I wondered the same thing all over again.

Now, Auto Express is showing a rendering based on the recent Hakaze concept that shows what a sub-CX-7 crossover with Mazda's new design language could look like.

Expect this to be more in line, size-wise, with the Mazda3 (the CX-7 is a bit bigger), seating for 4, comfortably, powered by a non-turbo 4-cylinder. It would be available in front or all-wheel drive with either a manual or automatic tranny. Instead of 4 conventional doors, expect a very RX-8 like treatment with suicide rear-doors offering exceptional access to the back seat.

While AE expects the CX-5 to hit the ground as a 2010 vehicle, we've been hearing from Mazda that the concepts they have shown this year would culminate with a production-ish vehicle at the end. Given that, I'd expect to see a CX-5 early in the next auto show season (which starts in September 2007). Then again, the Hakaze could have been the 'production-ish' one also.

Of course, why these crossovers aren't named CX-3, CX-6, CX-9 in keeping with Mazda tradition is beyond me.