Why the G8 will succeed where GTO failed

Pontiac is going rear-drive with their new top sedan with the Holden/Zeta based G8.

Here's where I think they went wrong with the GTO and how it is all going to succeed insanely well with the G8...

What was really wrong with the GTO?

Really? Not that much. The GTO had insane power, the best interior in the US GM lineup at the time, great handling, room for 4 adults, and fuel economy that cracked the upper 20's with the 6-speed manual.

Where GM missed the boat is in underestimating how much people expected a GTO to look a specific way. The GTO was based on an almost 10-year old design that had styling more in common with the old Cavalier coupe than the in-your-face designs of the past GTOs. A GTO was expected to be aggressive, unapologetic, and a man's car in every sense of the word. The 2004-06 GTO was smooth, sophisticated, and elegant in design...it's no wonder that the manly-men that wanted a 'real' GTO stayed away in droves.

That said, I've driven the GTO (2005, 6.0l 400hp V8, 6-speed manual) and can attest that this was one of the performance standouts of recent memory...but if you can't get the customers in the seats to find out...then you won't move the metal. 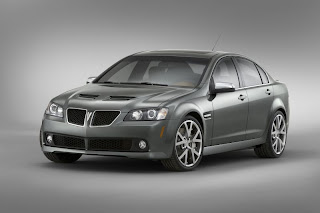 What's right with the G8?

The G8 skirts just about every negative above while maintaining the positives that made the GTO a great driver's car.

G8 is a new nameplate, so there's no preconceived notion from consumers as to what this car is supposed to be. Grand Prix buyers, especially the middle-aged, female NASCAR demographic might not be too happy with losing their front-drive sedans - but they should be easily replaced by an enthusiast buyer who wants rear drive but can't give up the back seat. The V-8 should draw 300c buyers from Chrysler, especially the ones that lament the lack of a manual in the Chrysler. Pontiac doesn't seem to think so, but I believe a manual with the 3.6l V-6 would be a hot seller as well, maybe if gas prices spike some more.

Also, the sophistication that didn't play well for the GTO works wonderfully well in a sports sedan. On top of this, the G8 is on the brand new Zeta chassis, so an even better ride/handling compromise should be in the cards.

So, G8 should show exactly how much better this cross-pacific platform sharing works with a couple extra doors. Now, if the new GTO that is rumored to be coming in a year or so skirts the negatives of the 04-06 GTO...Pontiac's resurgence should be well on its way.