One of the major complaints from consumers about hybrids is that most people can't manage to get anywhere close to the EPA ratings.

Starting for the 08 model year, the EPA is adjusting their mileage numbers to reflect something closer to real-world numbers. Of note is that the testing procedure has not changed - the EPA is basically running the existing numbers through a correction formula to get the new ratings.

Also of note is that the fuel consumption really has not changed. The EPA is merely trying to give consumers a more realistic expectation when they are comparing vehicles.

So, here is what the changes give us (when available, comparable non-hybrid models are also listed). The each set of numbers are city/highway/combined ratings. The first set are the old ratings while the last column are the ratings under the new formula. 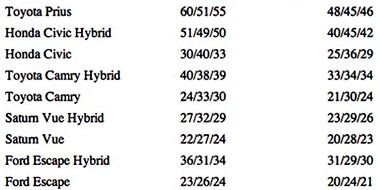 One must remember that all cars are affect, not just hybrids, and the hypothetical increase in gasoline usage due to this adjustment is actually less than that of low mileage vehicles.

I looked at the old and new EPA numbers (combined city & highway) for a few vehicles and then calculated how much the difference translated into fuel consumption over a 1000 mile interval.

Yep, there are many ways of looking at this. But, hybrids have taken a serious beating in the ratings with the new standard (vs. conventional cars).

The important thing to remember is this is just a change in rating. All cars are getting the same real-world mileage as they always have.

The new rating system could effect sales...especially with Toyota. People already have unrealistic expectations when it comes to the new Prius, and this could send them somewhere else. Besides, the Prius needs incentives to sell already.

Perhaps Toyota's stated goal of selling a million hybrids a year is endangered...after all, 40mpg can be had with a much cheaper Honda Civic.