Is This a Barracuda? 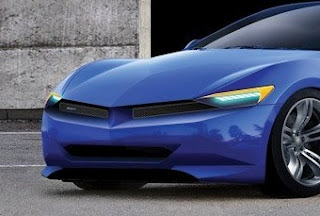 Car and Driver has commissioned an artist's rendering, based on eye-witness accounts and the latest rumors, of what Chrysler's rumored Barracuda sports car might look like.

Rumors have flown of late that Chrysler is working on a new rear-drive platform to be shared with Fiat and will debut a new sports model under the Barracuda name. This may fully replace the current Dodge Challenger or might be a modern rear-drive sports machine the supplement the retro-themed Challenger.

Use of the name, previously used on a Plymouth version of the Dodge Challenger, for a more modern rear-drive sports car, might be a bit controversial to purists.  However, as a hedge against a rumored lighter, more modern, and more efficient Mustang and Camaro - the Baracuda could be exactly the right choice.

The new platform is expected to be modernized and lightened by upwards of 300lbs vs the current Challenger - which has always been significantly bigger than its Ford and Chevrolet competition, due in no small part to being built on Chrysler's only non-truck rear-drive platform, shared with the large Chrysler 300 and Dodge Charger.  This will allow the car the meet efficiency mandates, have improved handling, and better match the direction that the other pony cars are heading.

It is likely that, given the lack of a Plymouth brand to sell the new Barracuda under, that Chrysler will decide to sell this as a unique SRT branded model (similar to the new SRT Viper that was previously sold as a Dodge).

So, what do you think?  Is this a worthy successor to the Barracuda name?

Source: CarandDriver.com
Posted by Scott K at 12:06 PM No comments:

After spending a few days using the Volt to commute and needing only a small amount of gasoline per day to complete my drives, this left me wondering how things get when you have an even longer drive.  How would the Volt behave when leaning heavily on the range-extending gas engine? 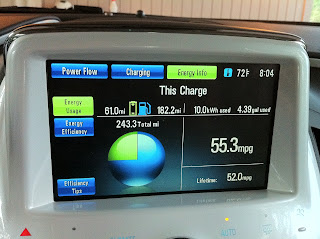 The test case was a Saturday full of errands with a solid 243.3 miles of mountain and interstate driving down into Denver and around town before heading back up to UOwCars headquarters.

In keeping with Volts MO, the first 61.0 miles were on battery capacity (um, what was that about a rated 35 miles in electric again?) and the remainder on gas (182.2). Apparently the missing 0.1 is lost in 'GM Math-land'

While higher speeds on the gas engine were a bit drone-y (due to the higher RPM the engine needs to run at to provide adequate electricity to maintain speed) otherwise the car simply behaves as expected with no obvious downside to running in this mode (though there were no situations where I needed emergency passing power or to climb severe grades beyond the 6-mile/1500 foot elevation gain drive at the end of my daily drives - situations where I might expect to feel that I only had 74hp at my disposal).


I also got a chance to use the Volt's Mountain Mode feature.  On a completely flat battery and 15 or so minutes before heading up the last climb to home, I switched to that mode by pressing the 'Driving Mode' button three times.  The Mountain Mode attempts to achieve or maintain 40% charge in the battery.  If you are already at or above that charge level - the engine does not turn on.  If you are below that level, the engine will start and attempt to put charge into the battery as well as propelling the car to get you back up to 40%.

In this case, the engine, which was running most of the time anyway turned on, at high rpm, and stayed on (see my prior observation about drone). In this mode, the battery never showed a charge during this time, leaving you largely in the dark as to what it is doing.  However, once I turned Mountain Mode off right as the climb started, the engine switched off and it never turned on during the entire climb.

In other words, if you are willing to plan climbs, even on high-mile/range-extended days, you will appreciate the work this mode does to prepare the Volt for the more strenuous loads.


So, after what is significantly more than the battery-only range, what do the numbers look like?

Electricity was still $1.04, total, for the 12kWh (amount estimated to recharge).

I burned 4.39 gallons today, for 41.45 mpg during the actual miles driven under gasoline power (the 55.3 mpg listed above is because the Volt calculates based on total miles vs the gasoline burned).

You start to see what we might have expected...savings are not linear with miles traveled since your biggest wins are when you stick to the cheapest energy per mile - the kWh living in the battery pack.

Having the gas engine means never having to say 'oops' when you get to the battery pack's limit...but you rapidly start to approach simply an average compact's mpg as distances get longer.

However, there is another way to look at this (one that GM hopes consumers will think about)... if I were in a Nissan Leaf (a car that would handle the day-to-day commuting just fine) for this drive, I'd have been sleeping in it that night waiting for the battery to charge somewhere less than half the way through the day's driving.  This is the usage case for which the Volt seems designed.

Next up, more talk about the Volt's underlying technology and how it compares against competitors.