From the CaddyEdge.com - Black Friday – As in Burning Rubber

Andy Pilgrim, of Cadillac’s racing team fame, has taken an ATS to the track for a little hooning. Enjoy.

The post Black Friday – As in Burning Rubber appeared first on the Caddy Edge .

We've been linking to YouTube video reviews of some of the cars that are being considered for our Fun Car Shopping challenge.

These aren't the only cars in contention for -our- hard earned dollars, but give you an idea what you can get into for significantly under the 30k average new car price.

For instance, we have seen one example of a Pontiac Solstice GXP coupe for $22k...for a car that was build in very limited numbers and could be considered a future classic (potential a down-side if you plan to really drive a car from this list). 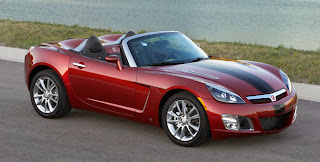 A Solstice GXP or its Saturn twin Sky Redline, both in convertible forms, fall in the mid-teens and are often un-molested (but have a fairly limited selection of performance parts to choose from - if you plan to not leave your sports machine stock).

On the more expensive side of the spectrum, you can get into a real track warrior like the Lotus Elise for mid-20k money.  Just plan to have access to another, less hard edged, car for longer drives.

In between there are cars like the perennial Mazda MX-5 (offered in both soft and hard-top in the  newer models) for high-teens money.  Honda's S2000 is available in our target price-range and has a bit more room than the Mazda and is a bit sportier still. 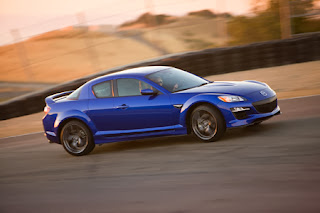 Finally, in this initial list, for those looking for more practicality and less wind in your hair, there's the Mazda RX-8.  The only car to offer the quirkiness of the Wankel rotary engine, the RX-8 has a screaming 9k redline as well as seating for 4 normal sized humans.  Just be prepared for the other quirks of rotary ownership...namely a thirst for petrochemicals in their various forms.  Getting into the 20's in mpg is considered a badge of honor in the rotary world.  Rotaries also, much like a 2-stroke piston engine, burn oil as part of their normal operation.  Accept these thirsts, and the RX can be a great all-rounder for someone who wants a sports car but has a family to consider.  Additionally, the RX is offered in normal and R3 trims (2009-2011 models only) that allows you to choose a more sedate drive vs a more track-focused model.

So, in the coming weeks, we will be trying to get seat time in some of these models and write more in-depth reviews to help identify each model's strengths and weaknesses.

Enjoy the ride.
Posted by Scott K at 8:00 AM No comments:

Just as beastly as it looks, http://www.WatchMojo.com takes the Mazda RX-8 R3 out to burn a little rubber.

This S2000 has been featured in a more recent review for our show (in HD): http://youtu.be/jImHTWfj8aM In this original review the guys do some canyon carving in the Honda S2000. Lots more on the way - look for us on Thursdays! We read every comment, so subscribe and stay connected for more: Like us: Facebook.com/EverydayDriver Follow us: Twitter.com/EverydayDriver

The guys take out the latest hard top version of Mazda's iconic roadster. How does it compare to past generations and the Honda S2000.

From the CaddyEdge.com - Cadillac Wants to but May Not Build Elmiraj Coupe

The good folks at Autoblog.com got to speak to head of GM Design Ed Welburn about the possibility that the Elmiraj Coupe would see its way to Cadillac showrooms. It is clear that Cadillac leadership would love to bring the car to market as a companion to the expected S-Class sedan fighter (rumored to be […]

The post Cadillac Wants to but May Not Build Elmiraj Coupe appeared first on the Caddy Edge .

From the CaddyEdge.com - ATS Coupe to Bow at Detroit Auto Show in January

The 2015 Cadillac ATS Coupe is expected to be shown publicly for the first time at the North American International Auto Show in Detroit, Michigan in January. This will set the stage for the ATS Coupe to go on sale in summer of 2014 as a 2015 model. Expected power trains may mirror the sedan […]

The post ATS Coupe to Bow at Detroit Auto Show in January appeared first on the Caddy Edge .

The guys fell in love with this car a while ago, here's the review from an early test episode. More at www.EverydayDriver.com.

The average transaction price for a new car is now north of $30k.

Most sites spend all day talking about the cars you can buy for that much and a large number of those are a snooze.

Exciting seems to be always out of reach because the Stingrays, Caymans, GT-Rs, and their like are double that average price.

There are a select few in the sub-30 range new worth looking at (think Mazda Miata, Subaru BRZ/Scion FR-S twins)...but what if there was more?  What if you set your ceiling at 30k but were willing to look at a broader selection of cars. What if you consider lightly used cars from the last 15 years as well?

Well, in the coming weeks, we will do just that. Sports cars that can be had for loaded Toyobaru money.  We'll post overviews of cars on the list, links to reviews to help you remember what made them exciting, and then our driving impressions.  Ultimately this should culminate in an addition to the UOwC fleet.

Stay tuned for some posts reminding you of what fun has been available in the past decade or so and is now attainable.

Let's get started.
Posted by Scott K at 9:25 PM No comments:

On this episode of Ignition, Carlos Lago drives the Mazda Super20, a former SEMA show car built to celebrate 20 years of the Miata and to highlight the car's ties to motorsports. Packing R-compound rubber and a supercharger, this Miata is certainly capable. A trip to the test track and a mountain road will show us just how capable. Ignition appears every Monday on the Motor Trend youtube channel. http://www.youtube.com/motortrend Subscribe now to make sure you're in on all the action! http://www.youtube.com/channel/UCsAeg... Facebook - http://facebook.com/motortrendmag Twitter - http://twitter.com/motortrend Google+ - https://plus.google.com/1018679678590... Website - http://www.motortrend.com

Recently we fielded a question about Cadillac’s plans for an ATS Coupe. As this recent post from Autoblog.com shows, Cadillac is actively testing a 2-door version of the ATS. But, if that was all these shots showed, we’d be happy. But there is more to this scoop. Check out the larger wheels and tires, check […]

Editor-in-Chief Ed Loh explains why the new 2014 Cadillac CTS has been named Motor Trend Car of the Year for 2014. Read the full story here: http://www.motortrend.com/oftheyear/car/1401_2014_motor_trend_car_of_the_year_cadillac_cts/ Motor Trend's Car of the Year program is open to any all-new or substantially upgraded 2014 automobile. Rather than being compared against one another, contending vehicles are first put through Motor Trend's full battery of performance tests to measure acceleration, braking, and limit handling. All contenders are then evaluated on three separate courses at a professional automotive test center before finalists are selected. Out of 22 contending 2014 models, Motor Trend's judges picked seven Car of the Year finalists, in addition to the Cadillac CTS: BMW 4 Series Chevrolet Corvette Jaguar F-Type Kia Forte Mazda3 Mazda6 Mercedes-Benz S-Class Each finalist is then driven on a real-world road loop that provides a range of surfaces and traffic conditions to evaluate ride and handling, engine and transmission smoothness and responsiveness, wind and road noise, and ergonomics. In the final phase of Car of the Year, Motor Trend judges debate and evaluate each vehicle against the awards six key criteria: Design Advancement - well-executed exterior and interior styling; innovative vehicle packaging; good selection and use of materials. Engineering Excellence - total vehicle concept and execution; clever solutions to packaging, manufacturing and dynamics issues; cost-effective tech that benefits the consumer. Efficiency - low fuel consumption and carbon footprint, relative to the vehicle's competitive set. Safety - a vehicle's ability to help the driver avoid a crash, as well as the secondary safety measures that protect its occupants from harm during a crash. Value - competitive price and equipment levels, measured against those of vehicles in the same market segment. Performance of Intended Function - how well the vehicle does the job its planners, designers, and engineers intended it to do. After 10 full days of testing, driving and deliberating, Motor Trend selected the CTS as its Car of the Year for the second time in six years. The 2014 Cadillac CTS is offered with three powertrains. A 272-hp 2.0-liter turbocharged four-cylinder is standard and EPA-rated for 20/30 mpg city/highway. A 321-hp naturally aspirated V-6 is available. Rear-wheel drive is standard; all-wheel drive is optional. Exclusive to the rear-wheel-drive CTS Vsport is the all-new 420-hp 3.6-liter Cadillac Twin-Turbo V-6 engine. The 2014 CTS is also the first Cadillac vehicle to receive the brand's eight-speed automatic. Pricing starts at $46,025, including a $925 destination charge. Since the first Motor Trend Car of the Year was awarded to the Cadillac brand in 1949, Cadillac has won the title three additional times -- for the full brand again in 1952, with the 1992 Seville Touring Sedan, and with the second-generation CTS sedan in 2008. For more information about the award, judging process and the contenders check out the January issue of Motor Trend, visit www.motortrend.com and search the hashtags #MTCOTY, #Cadillac and #CTS on Twitter, Instagram and Facebook. Subscribe now to the Motor Trend Channel make sure you're in on all the action! http://www.youtube.com/subscription_center?add_user=motortrend Facebook - http://facebook.com/motortrendmag Twitter - http://twitter.com/motortrend Google+ - https://plus.google.com/1018679678590... Website - http://www.motortrend.com